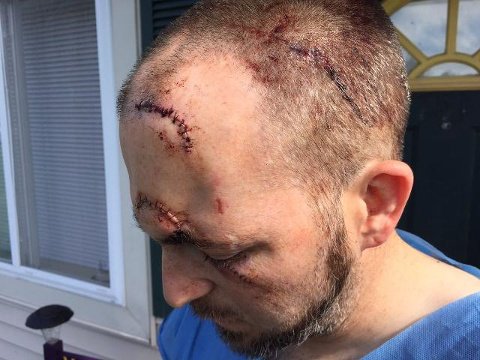 A Vikings fan in enemy territory found himself at the business end of a box cutter without his carry gun.

Dave Moschel of Stoughton, Wis. was attacked by a man who was outside his house cutting up his Minnesota Vikings inflatable.

A concealed pistol permit holder, Moschel was not carrying at the time of the attack and says he was glad he was not.

"Luckily, I didn't have my concealed carry on me at the time," Moschel said. "Ninety-nine percent of the time I leave the house, I never leave without it. And this is the one time I did. I'm kind of glad I did, because he would have been dead, and I would have had to live with that."

Many instructors and CCW advocates will say you should also carry in the safety of your own home. You can't always get to the pistol safe when an event arises. That of course is a personal choice.

I won't play Monday morning quarterback, nor will I criticize Mr. Moschel for not going outside armed. Any analysis of the incident would have include the possibility that the threat of deadly force, the homeowners carry pistol, may have caused the assailant to flee. However his willingness to recklessly attack Moschel also indicates he may have been willing to stare down the gun.

Moschels gratitude that he didn't shoot his alleged attacker, 21-year-old Jacob Justice, is interesting. While many pistol permit holders will brag that if put in that situation they would have no problem drawing and firing, Moschel is grateful that he didn't despite being a consistently armed citizen.

The only conclusions I can draw from this incident is that while going out to confront the tresspasser unarmed wasn't the right decision, it wasn't enitirely the wrong one either, at least in his mind. Moschel seems that he would rather have some scars on his face than have to deal with the emotional scars of having to fire on a human being.